Today I get the fun task of revealing the amazing Paris experience that we had on the final day of our recent trip (I posted a teaser yesterday!) Hopefully that post and the photo I included was enough to whet your appetite. If you are into art and in particular contemporary installation art, I can pretty much guarantee you’ll enjoy this post, and even if you are not, I think you will too (well, I hope so, at least!).

An external shot of the Grand Palais, with a billboard for Daniel Buren’s MONUMENTA 2012 show

MONUMENTA is an art project organised by the French Ministry of Culture and Communication which has been running for a couple of years now. I’d never heard of it before, and it was only by chance that we got to catch MONUMENTA 2012. Each year a different well-known international contemporary artist has been given the space of the nave in the Grand Palais to create a site-specific art work – no mean feat given that the Nave space is 13,500 square metres!

I had been fortunate to visit Paris a couple of times before this trip, but one place that I had never managed to get to but had really wanted to was the Grand Palais. So this time it was right up the top of my “things I really must do in Paris on this trip” list! The reason why I was so eager to see the Grand Palais was simply for the building itself  and in particular its Nave – as you can see from the photo above, it is a massive space (approximately 240 metres long!), constructed from steel, iron and glass, inspired by the Crystal Palace in London. Standing just off the Champs Elysee, the Grand Palais was built for the Exposition Universelle in 1900, and given my reaction to the incredible structure (the amazingly high glass domed roof made me gasp when I walked in!), I can only imagine how awe-inspiring it was back then. Surely it was quite an engineering and architectural feat to behold (as I still think it is now). You can read more about the fascinating history of this building which merges classicism with Art Nouveau here (it was used as a military hospital during World War Two, believe it or not!). This video is great because it takes you inside the building and you can get a real sense of just how huge and magnificent the space itself is.

Anyway, back to the fact of our chance encounter with MONUMENTA 2012. Although we vaguely knew that the Nave of the Grand Palais is today used mainly for art exhibitions, we had no idea that we would be greeted with such a, well, monumental exhibition as what we experienced when we visited the Grand Palais. But as we glimpsed a shimmering rainbow of colours as we walked past the entrance to buy our tickets, our anticipation grew. Before we knew it we were walking in rainbows, in Daniel Buren‘s work entitled Excentrique(s) Travail In Situ. 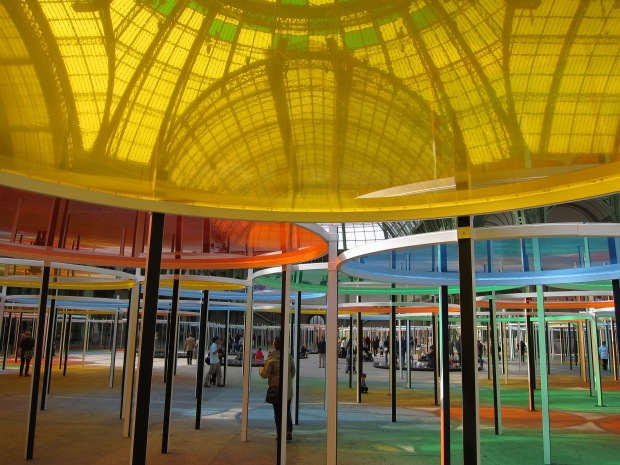 Daniel Buren is a French artist, recognised as a master in the fields of abstract minimalism and conceptual art. As you can see from the photos, Excentrique(s) Travail in Situ consists of hundreds of coloured, transparent circles which as the viewer of the art work, you walk underneath – so you become part of the work, viewing it from the inside (and with the ability to view it from the outside, when standing above the circles on the grand staircase of the Nave). Motion is often an important element of Buren’s works.

Four colours are used, and these also play into the art work through the medium of sound. The true brilliance of the work becomes clear when strong sunlight streams in through the glass roof of the Grand Palais. As the light spills in, the coloured circles are reflected on the concrete floor, creating a patchwork of circular colour under your feet. It felt somehow magical to walk among this field of colours. 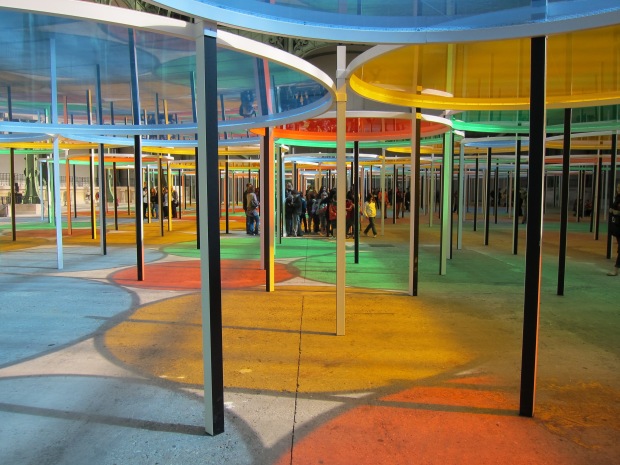 The way the work plays with and at the same time somehow integrates and contrasts with the building it is in is impressive too.

Buren discusses the importance of the work being based on circular forms, because the Nave of the Grand Palais itself is based on the circle shape. He says that one of the most important elements of making the art work successful is the proportion – the circles form a low-hanging canopy over your head, and the glass roof of the Grand Palais soars above and over the top of this colourful canopy. The sense of two skies above you (or three, if you count the real sky outside!) really comes through, and the glass roof of the Palais is mediated by the vivid transparent colours. 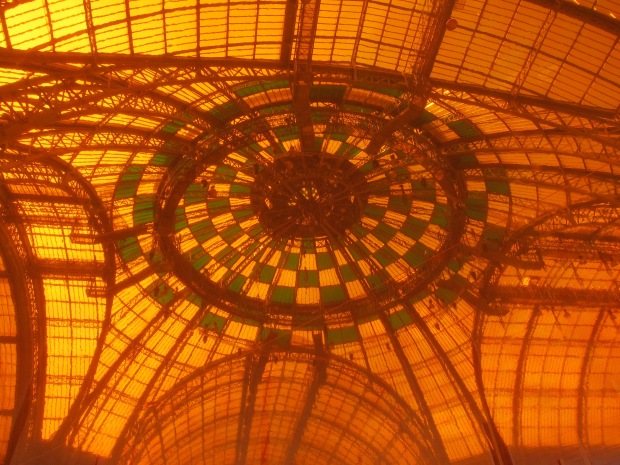 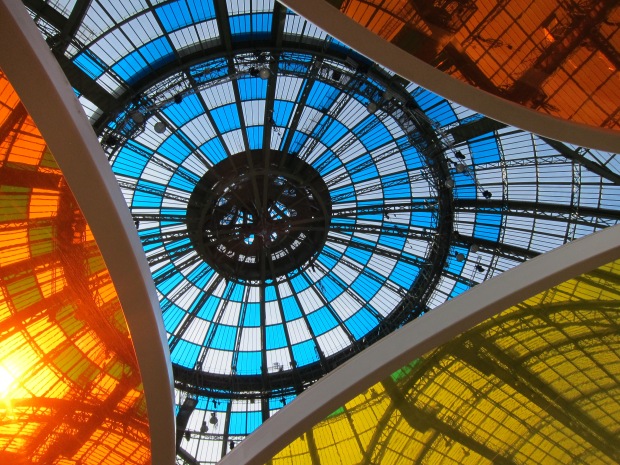 One of the things I loved most about Excentrique(s) Travail in Situ was the way it was really experiential art – with the colourful reflections below my feet and the colourful, glassy skies above me, my eye was drawn up and down and throughout the whole building as I moved through the work. I found the use of reflections again, this time through the circular mirrors placed on the ground in the centre of the Nave extremely clever.

I especially liked that as the viewer, you could stand on the mirrors and experience the optical illusions at play. This was the result:

This is the fifth time that MONUMENTA has take place. The artists who have exhibited previously have been German artist Anselm Kiefer (2007), American artist Richard Serra (2008), French artist Christian Boltanski (2010) and Indian-British artist Anish Kapoor (2011).  In the recent part of his career, Daniel Buren has worked increasingly in abstract installation art, and with artworks with architectural elements and influences. These works have often been site-specific; in this respect, Excentrique(s) Travail in Situ surely represents a high point in his impressive body of work (if you like what you see in the photos, be sure to check out the official Excentrique(s) Travail in Situ website and Daniel Buren’s official site too, which has a great back catalogue of his work). For me, this work is the most incredible installation art work that I have seen in a long time – with only my experience of being inside in a luminarium by Architects of Air coming close. Whilst in Excentrique(s) Travail in Situ we experienced some elements that were familiar (the transparent colours reminded us of this at MUDAM), Buren’s work in the Grand Palais was, on the whole, a truly unique and unforgettable art experience. Possibly the only thing that would have made it even better for  us would have been if we had got to experience it on this day instead – the combination of art and electronic music would  have been truly irresistable.