During the course of one of our many long and winding walks around the city of love (Paris, of course!) in June, we crossed le Pont des Arts, one of the many bridges criss-crossing the Seine (it’s truly impressive the number of bridges crossing the Seine, and these are the ones in Paris alone!). However, this was a bridge with a difference: little did we know when we stepped onto this footbridge that we were about to cross one of Paris’ love-lock bridges.

PJD and I proved to be a study in contrast in terms of our reaction to seeing this array of locks, left by lovers in symbolic immortalisation of their love (with the key presumably thrown away over the side of the bridge into the murky depths of the Seine below). I was strangely excited and intrigued, whilst he kept striding ahead, giving the locks hardly a passing glance (and even when I called his attention to them he remained decidedly – and to me, somewhat disappointingly – uninterested!). I can’t really give a good explanation as to why I was excited, other than that I guess it brought out the romantic in me, and I remembered that I had been intrigued a few years back when I had read about the love locks left on la Via Dell’Amore in the beautiful Cinque Terre in Italy (the Cinque Terre walking tracks linking the five villages of Monterosso al Mare, Vernazza, Corniglia, Manarola, and Riomaggiore, perched on cliffs overlooking the Italian Riviera happen to be  one of my long-held dream travel destinations! The story behind the Cinque Terre’s via Dell’Amore is pretty lovely). Since leaving Paris, I have discovered that the Pont des Arts is evidently not the only bridge in Paris which has become home to the locks of those keen to leave a symbol of their love behind. This article says that the Pont de l’Archevêché also has become the home to love locks (there are some lovely close up photos on that page too – the photographer obviously had more time to linger than I did!).

However, I have also found out that there is some level of intolerance towards these love locks in Paris from the municipal authorities, who in a “nocturnal clean-up” in 2010 swooped on the locks, and one morning they were gone, just like that. 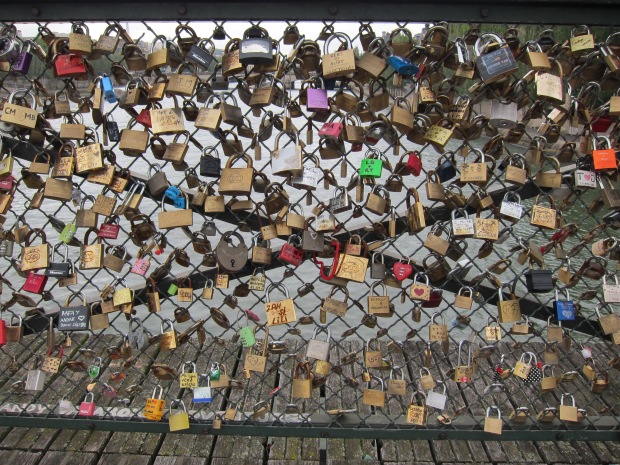 But the locks are now well and truly back as my photos attest, in all shapes and kinds, from the tiniest of suitcase padlocks, to the chunkiest of bicycle locks, the lovers who have left their locks on the Pont des Arts seemed to have been, on the whole, indiscriminate in the kind of lock they have chosen as their statement of love (apart from those few stand-out red, heart-shaped locks – points for extra effort there). There was also a real range of approach in the personalisation of each lock on the bridge. Some seemed to have been hastily written on with no more than a mere Sharpie, which made me wonder if the couple who had placed the lock there had done it as a spontaneous gesture upon seeing the bridge, backpackers who had hastily grabbed the padlock off their pack and locked it to the bridge in an ode to their love and being together in the city of love. Others, however, had been professionally and elaborately engraved with names, dates and hearts. When it came to these locks, I was left wondering if they were the locks of local lovers or of those who had carried their locks from afar, pre-prepared for this long anticipated date with le Pont des Arts.

As I looked along the stretch of the bridge towards the Insitut de France, I concluded that although I’d never know the stories behind these locks, these lovers had indeed chosen a beautiful spot, and the sight of the Île de la Cité from the bridge (photo below) settled this in my mind. Love locks are (from what I have found out through my research) becoming somewhat common in different places in the world. Perhaps some lovers are even now going from love lock destination to love lock destination, keen to lock their love in as many spots as possible, in the hope that they shall return there some day. For me, I don’t think we’ll ever “lock” our love in any one place, but I like thinking about the people who have undertaken this symbolic gesture, and the myriad of love stories that lie behind all these locks, scattered through special places around the world.

Photos by CIA in Paris, June 2012. Have you, or would you, place a lock on a bridge like the Pont des Arts, or somewhere else in the world? What do you think about love locks?!